One of the nice things about staying in Valla Folkhögskola is that it’s right next to lovely walks through Valla Gård – with all of its historic treasures of rural life in Sweden – and into the forest beyond. Of course, it’s also handy for going to conferences on the Valla campus of Linköping University which is why I was there last week.

I’ve been taking lots of pictures lately using the body cap fish eye lens for my Olympus.  I find that taking just one lens with me means I get used to what it will, or will not, do and here’s a range of the pictures I took with it.  The students were doing a group project and I bumped into them one lunchtime and asked if they minded me taking their picture.  As you can see, some of them had to be dressed as fictional characters.  The rest of the pictures were taken one evening and I experimented with different foregrounds beneath the interesting cloud formations.

A couple of days ago we visited Kate’s sister at Harbottle.  It’s an enchanting village, quite remote at the upper end of Coquetdale, where spring flowers are still to be found in full bloom at the end of May.  I’ve never seen clematis look so enchanting. The air was full of their delicate blossom and they looked like jewelled ropes strewn over the grey stone walls.  The beech and oak woods were full of bluebells: this made for a slow walk with the dog as we just had to stop for photographs. 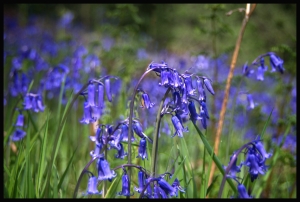 It was the very start of spring (mid April) when we arrived in Sweden.  Opposite our bedroom window at Valla Folkhögskola in Linköping there’s a south facing bank of wild flowers beneath an avenue of trees.  One morning in late April the light was just perfect and, with the ground being dry, I just had to go out and lie down amongst the flowers to take some pictures.  There were carpets of daisies, scilla, vitsipporna (wood-anemony) and gullvivorna (cowslips).  I’ll never forget the vitsipporna blossoming in Vallaskogen this year: they looked like gentle drifts of snow. 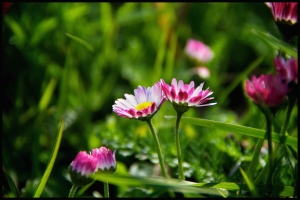 Old buildings have always appealed to me.  There something about their solidity and history that makes me want to picture them.  This past six weeks I’ve been right in their immediate vicinity. 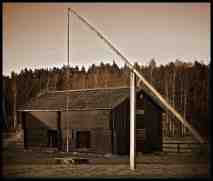 At Valla Folkhögskola in Linköping we were housed next to the ‘fritidområde’ with all of the old farming and railway buildings.  We strolled out in the clear evening light to relax after a long day’s work and always found the environment stimulating. Just beyond, and through the forest, is a lovely walk to Gamla Linköping:  you can see our sunset shadows on the cobbled square. 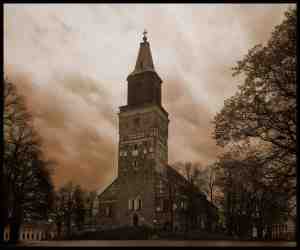 Once we’d left Linköping we had a few days working with colleagues in Turku, Finland.  We stayed in Villa Hortus and so walked past the massive cathedral everyday.  It totally dominates the old city area, looming out above the Aura River.

And now I am spending my remaining time in Europe with my fantastic relatives at Warton Farm in Northumberland.

The monochrome/sepia treatment transfers something of the feel of all of these splendid places.

This past six weeks I’ve been exploring new ideas and finding some new directions in my nature photography.  Since finishing Symmetry in Nature in January I have been full of the urge to create but I was only able to follow this once I got to Sweden and Finland in April and May.  The places I have stayed have been exceptionally beautiful and because I’ve been released from the usual routines then I have let myself go.

You can see from these three pictures that I’ve spent plenty of times in the forests with the trees searching for, and finding, their hidden imagery.

Friday last week was taken up entirely with the public defence of Per-Olof Hanssons’ PhD thesis: New Ways of Learning: Participatory Action Research and Kenyan Runners’ Appropriation of Smartphones to Improve their Daily Lives and Participation in m-Learning. 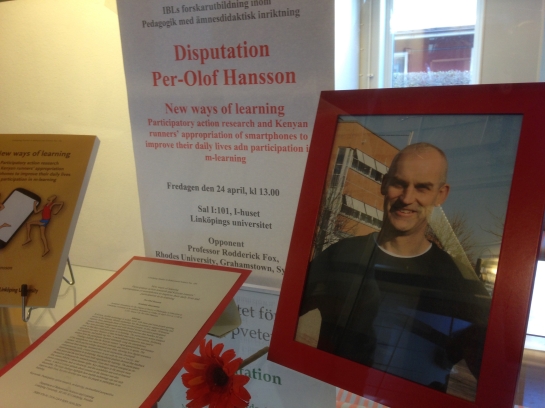 I was invited to be the opponent and soon learned that meant I had to make a presentation (below) summarising the thesis and then lead the discussion.  All of which is open to the public.  The three examiners, interested colleagues, friends, relatives and the general public all took part in the debate that followed.  This was a lovely experience to be a part of: one that is radically different to the behind-closed-doors process in South Africa.

After the discussions the examiners and supervisors withdrew to deliberate and returned later to announce the successful award of the PhD.  The partying then started and continued late into the night.  Per-Olof had kindly organised a really nice meal for family, friends, colleagues and guests at the faculty club on Linköping campus.  The proceedings  were punctuated by speeches and present giving (as you can see from the pictures!)  The live band kept the dancing going and we returned to Valla Linköping many hours later.

Crate of Tusker for Per-Olof 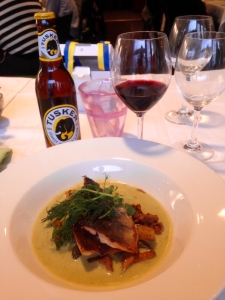 I was fortunate enough to be sitting with two of the elite Kenyan runners who had benefitted greatly from Per-Olof’s programme.  They were in Europe to compete for the Spring season and were hoping to win in this year’s Copenhagen marathon and half-marathon.  Last year they had won 13 of the fourteen events they had entered.

Here’s the presentation I made.

It’s the shortest day today (for us in the southern hemisphere) and distinctly warm here in Grahamstown (+25 forecast for this afternoon).  Time for a bouquet of flowers to celebrate the turn of the seasons.

These flower pictures were all taken during our nine weeks in the Nordic region and England. 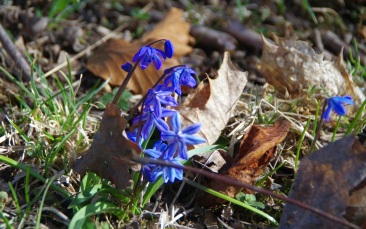 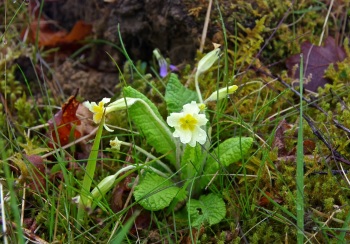