Here’s something a little different – three different takes of Grahamstown’s iconic Cathedral of St Michael and St George. The first is in the antique sepia style I’ve been using for the Grahamstown heritage series. The second is the full colour by moonlight shot and the third is a multiple exposure fantasy. They are all taken from almost exactly the same spot – just outside Makana’s City Hall on the north side of Church Square. 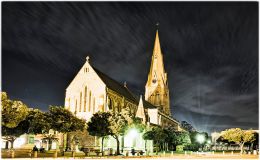 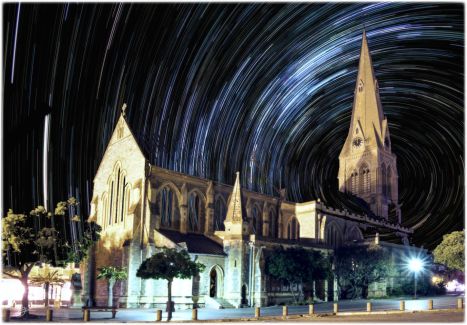 You would think that the Cathedral would be a heritage site but it isn’t – though it certainly makes a dramatic impression towering over the centre of the city. As usual I’ve made sure that the antique heritage style contains modern elements: the flaring street lights and the security guards relaxing in the square.

The colour moonlight picture was taken when the full moon was highlighting the clouds above the spire. That gives the composition some nice depth and definition and I’ve bleached out the colours a little to give the picture more punch.

The fantasy picture is a multiple exposure. I used the wheeling star trails as the backdrop because the original picture had a lot of ugly coloured flares of light in the night sky caused by the streetlights. Then I decided to strip away some of the fabric of the Cathedral to make it look skeletal. The clock is stuck at midnight and I took the picture just before Halloween!

I’ve already sold one of these as a high gloss print (I can now print on demand up to A3+ size). Let me know using this contact me link if you’d like one. This new series will also be on sale (probably as unmounted prints) at #NAF19 in my exhibition called ‘Reflections’ at the Carinus Art Centre 27 June – 7 July.