Sitting on the shelf in my studio are four stamp albums.  Three of them belonged to my Dad and the other belongs to Helen.  He gave her these albums and I have them all for safekeeping.

The post’s called loose leaves because in Dad’s ‘swops and to be included’ album are a few Kenyan stamps lying loose.  This got me wondering whether they were on the letters I sent Mum shortly before he died in 1994. Maybe I had sent her more afterwards?  I really couldn’t remember.  Perhaps they were meant for Helen’s album that was started in 1990 when we were on sabbatical leave in Durham and my Dad got her interested in collecting stamps?

First, though, I had a good look at the stamps in the Kenya section of my Dad’s ‘world’ album.  This is a good old-fashioned ring bound ‘Liberty Postage Stamp Album’ dating  from the 1950s.  A clue to that comes on page 75 where the section for Kenya, Uganda and Tanganyika describes them as a ’A British Colony and Protectorate in East Africa’. 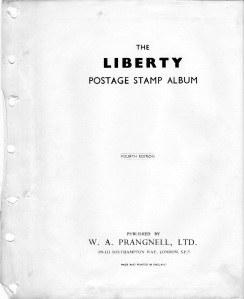 Dad, being the thrifty person he was, used the old computer printout sheets I had given him on which to attach stamps I sent.  These came on my regular (weekly) letters to him and Mum, I would also include any stamps that I’d saved for him.

It’s quite remarkable to see the stamps that I’d purchased, watched torn off their sheet, then licked and stuck down on an envelope and, lastly, seen being franked on the heavy wooden counter of the post office.  And where were the post offices?

In the early 1980s the main Nairobi post office was located at the top of Kenyatta Avenue.  I vividly remember going there immediately after Helen and Jeannie were born (in Nairobi Hospital) to send telegrams home to Mum and Dad giving them the good news:

It was there that we bought stamps and posted letters, aerogrammes and Christmas cards.  Parcels from relatives in England were also collected once you’d received the notification that something has arrived – you always hoped there was no duty to pay!

Not surprisingly you can see the franking ‘Nairobi’ on a good number of the stamps.  Another one I expected to see was KenyaWestlands – because we shopped in Westlands regularly and sure enough it’s there – along with Ruiri from the time we lived out on Ruera coffee estate from 1983-5.  They’re both found in the bottom row of flowers stamps.  Elsewhere on these pages you can make out stamps franked Lower Kabete, Malindi, Mombasa and Machakos. In the page below you can see the green Tourmaline 2/- stamp that was always a favourite of mine as was the purple 1/- Amethyst. 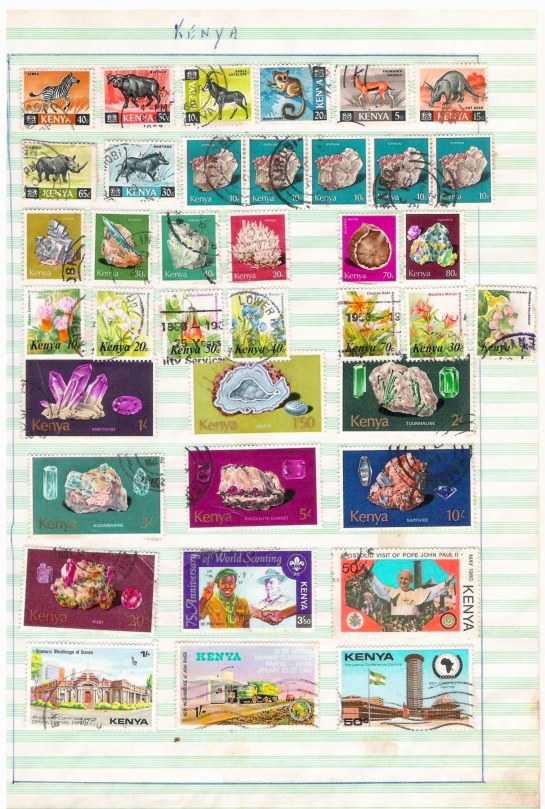 The looseleaf stamps almost certainly postdated 1994.   They were probably sent to me in South Africa and I will have sent them on to Mum.  On the 10/- Cinnamon-chested Bea-eater I can make out the Thika postmark so this was probably sent by a Kenyatta University colleague or friend from the coffee estates around there.  The 50/- Yellow-Billed Hornbill is post marked Gigiri so I’m pretty sure this came from Backson Sibanda, a former PhD student,  who was working at the UNEP headquarters there.  Unfortunately I can’t make anything out from the 100/- Hadeda Ibis stamps. 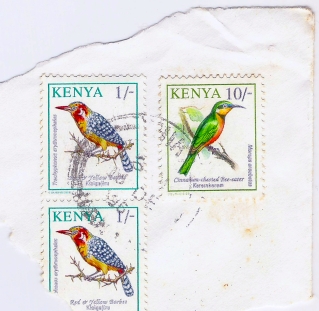 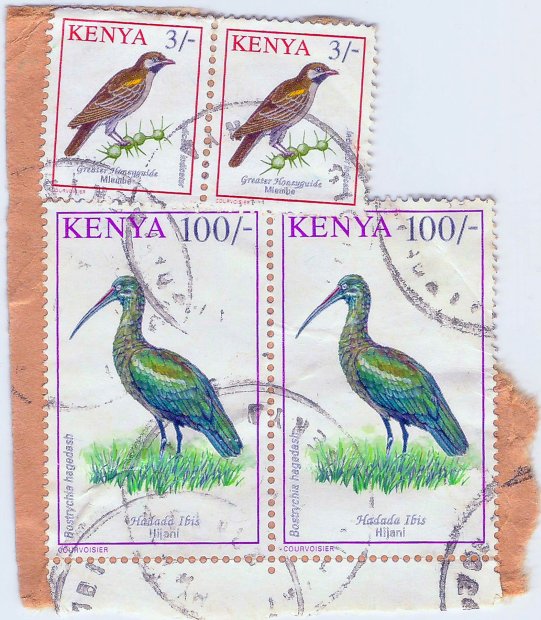 The last stamps are on an aerogramme sent to me on 30 June 1997 by David Roden. He was running the Marich Pass field centre in West Pokot.  I’d recently visited him – it was a memorable trip – and he was writing to acknowledge receipt of the geological reports I had sent.

Aerogrammes had four panels and three folds, you wrote your letter and then folded them up and sealed them with small flaps along the side.  If I remember rightly they were cheaper than letters!

3 thoughts on “Loose leaves from Kenya”