When we were in Iceland in 2013 we couldn’t find any mention of the cargo vessel Sonja Maersk running aground in Reykjavik Bay.  I had a picture of it which my father had taken but there was no indication on the harbour display.  You can see the pictures in Alfred Fox, Iceland 1940-42, first connections.  It’s a bit of a puzzle because you can clearly make out from the writing on the back of another picture of the same ships ‘ …. blown ashore du(ring storm) – Feb 41. Rey(kjavik) Bay.’

Since I posted about my experiences in Iceland I have heard from two people whose fathers were also involved when the Sonja Maersk ran aground.  The first is Ian Lambert whose father, John, served in the Dukes with my Dad.  Ian kindly sent me extracts from his father’s diaries, pictures and a copy of the Yorkshire Post’s ‘Garrison in Iceland ‘ a photo visit to the troops in Iceland. When I read them I didn’t connect them to the Sonja Maersk until much later. A couple of days ago I had this email from Jo Usher Schembri in Canada:

“Hello, my daughter was doing some research about the ship my Dad was on during the war, when she came upon your site. He sailed from Halifax Nova Scotia on the Sonja Maersk, and was shipwrecked in Reykjavik (the ship was also damaged and towed into England twice).  The only photo I have of the ship is one taken after another boat collided with it (which I think was also in Reykjavik). I had done some searching a few years ago, but this is the first time I have come across any info (I wanted to find some photos and maybe the names of some of the other men to give to my Dad, who unfortunately passed away 2 years ago).  My Dad’s name was Joseph Henry Usher.”

When I read this I immediately thought of the two other photos my father had taken of the Sonja Maersk. You can clearly see a second ship colliding with the Maersk, whose stern is on the rocks, and the smaller vessel is wallowing in deep seas up against her. 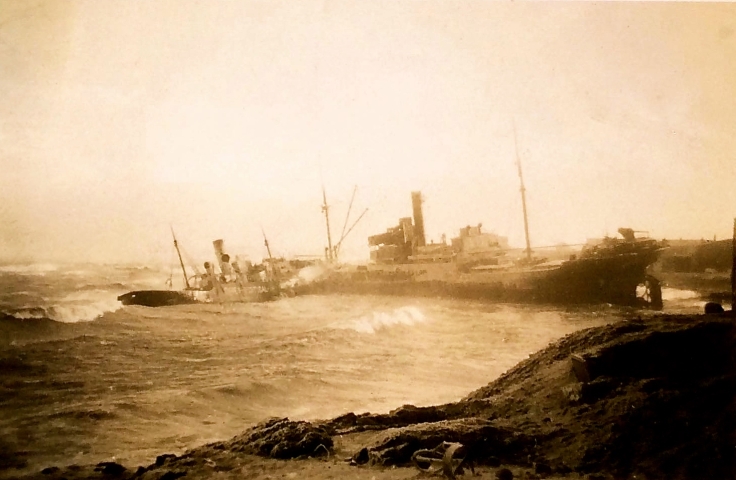 The next picture must have been taken from the other side of the incident – you can imagine my father rushing down from Skipton Camp to see what assistance they could give to those onboard – Joseph Henry Usher would have been one of them. The figures in the foreground are bent over the winds are so strong.

The last piece of the puzzle fell into place when I went back to John Lambert’s diary.  The entries for February 24-28th are very poignant. John records the incident pictured above: but he’s also receiving messages from home that his father is dying. 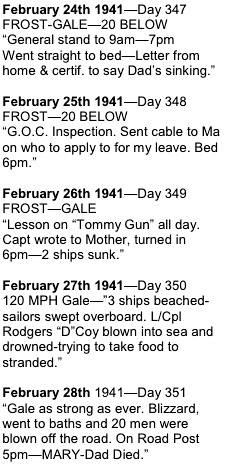 Throughout the five days it is blowing a gale (up to 120 mph) and temperatures are extremely cold.  Two ships are sunk on the 26th, three ships are beached on the 27th with sailors swept overboard. One of his colleagues is blown into the sea and drowned trying to get food on board to the stranded men on the ships.  On the 28th 20 men are blown clean off the road. His entries end with the sad news from Mary (his sweetheart) that his father has died.

So a small mystery is solved.  John Lambert is writing every night in Skipton Camp up on the hill above the Bay – waiting for news from home.  Joseph Henry Usher was on board the Sonja Maersk when it ran aground.  He would presumably have gone down the rope ladder you can see in this final picture and walked ashore through the wreckage you can see in the foreground.  My Dad will have been one of the troops who rushed down to help – in appalling conditions – and he somehow managed to capture the scene with a camera.

Many thanks to Ian Lambert for his father’s records and to Jo Usher Schembri whose email helped me piece this together.