Last Wednesday we were waiting to collect our luggage at Port Elizabeth airport when I got the news on social media that I’d won First Prize (Professional Category) in the WESSA Natural Heritage Photo Competition 2018. I was a bit stunned. That’s partly because we’d been travelling  home from Sweden for 27 hours but also I didn’t expect to win. A big thank you to the organisers, judges and Kwandwe Private Game Reserve for their generous First Prize of an overnight stay. 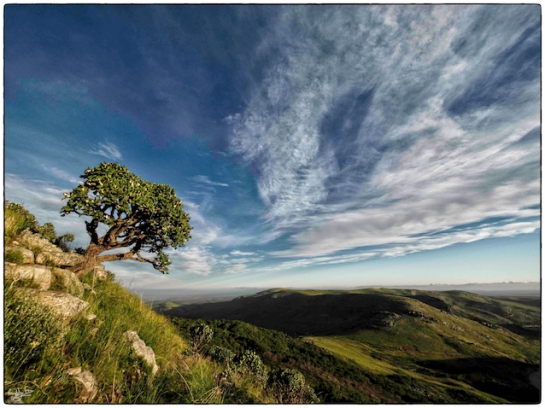 If you’d like to buy a copy there’s a download available over at my online store. Here’s the picture. Its one of the big trees at the top of the zigzags on the Oldenburgia Trail just below the radio masts on Mountain Drive. There’s a lovely patch of afro-montane forest and summer grasses beyond the tree on the shoulder of Featherstone Kloof. I took the picture using a very wide angle lens on my Olympus OMD E-M5MarkII – it was set at 7mm focal length – which is what pulls the clouds down into the frame. It’s a 1/1250 second exposure at F4, ISO was 200. I did a little editing in LightRoom.

It’s an unusual place – Grahamstown – located in a basin at the headwaters of the Kowie river. The poor black population in the eastern townships look across to the middle class suburbs on the other side of the valley.  There are not many South African cities where black and white are so closely juxtaposed. I live in Sunnyside, on the south side of town, and our house is quite high up on the side of a hill. A lot of my pictures look down into the valley.  I’m frequently photographing into the light too.  The cathedral is nearby – further down Hill Street – with the northern suburbs lying beyond.  Makana’s Kop is another Grahamstown landmark. It dominates the eastern side of town – across the Belmont Valley. 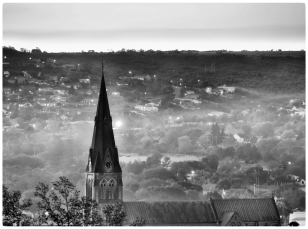 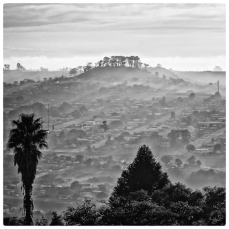 I wanted a set of black and white pictures so I needed to capture textures and shapes. South African townships are typically laid out on rectangular lines. This makes for clear compositions.  The two pictures here were both taken in winter with low angled light. Before dawn Vukani was wreathed in mist and smoke. I managed to catch the first rays of sunlight cutting across the mists.  Monument to Makana was taken just after a storm had passed at sunset.  Highlights of rain outline the regular street patterns.  The 1820 Settlers Monument is the large rectangular building that lies in the foreground of the picture.

In summer we are likely to get thunderstorms – but many of them drift eastwards past the town.  From the stoep of our house you can see them over the horizon – behind the spire of the Dutch Reformed Church.  Of course some of them do hit the town bringing heavy rain and dramatic lightning.

Off to the north west is the Rhodes University campus.  It’s surrounded by tree lined streets. Some exotic monkey puzzle trees are in the foreground of this picture.  Belmont Valley lies to the south east.  It’s where the Kowie River runs down to the sea. The leafy suburbs shown here are above and below Hill Street. They are beside the old road down to Port Alfred. 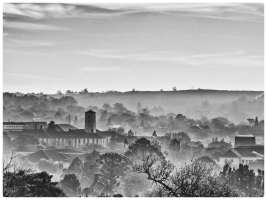 The last two pictures are also taken from the south side of town.  They’re higher up – on Mountain Drive – where we take our dog walking.  Both of them are looking right over the bowl containing the old districts of Grahamstown.  The townships have now spread right up Lavender Valley and out on to the plateau at Hooggenoeg.  The mountains on the skyline are the Amatolas.  The last picture is looking north-west – into the semi-arid Karoo. It shows the Winterberg range that is approximately 80 kms away.

There’s a nice selection of my Grahamstown pictures over at my online portal roddythefox.co.za. They’re reasonably priced. All of the pictures were taken with my Olympus OMD EM5 MarkII.  I’ve edited them in Lightroom using the Nik collection of plugins.

Photo Blog for Downloads and Prints