In a couple of month’s time Grahamstown’s Festival Gallery hosts its annual end-of.year exhibition.  This year the theme is Summer in Miniatures – artworks have to be no bigger than 30 cms.  I’ve decided to try out a submission with the idea of ‘Summer Nights’ and use a selection of four night pictures taken this past southern hemisphere summer.

The first two were taken on Ganora Farm which is just outside Nieu Bethesda in the Karoo.  Summer Nights 1: Angel and Obelisk was taken in the middle of the night when there was no moon.  I wanted to catch the Milky Way stretching directly above the rock and quite by chance I caught the light of my head torch that I was using to light-paint the top of the obelisk.  Summer Nights 2: Compassberg Star Trails was taken on a night when the moon was full which is why the landscape is so bright.  It’s a one hour exposure looking north to Compassberg mountain and has beautiful star trails arcing across the horizon.

Summer Nights 3 and 4 were both taken looking south from Mountain Drive, Grahamstown: so they are overlooking Featherstone Kloof.  In Summer Nights 3 I was joined by a firefly that flickered briefly past my right shoulder and up into the sky.  It’s another picture taken when the moon was full so I hid beneath a rock overhang to avoid getting direct moonlight on the lens.   For the last picture, Summer Nights 4, I highlighted Pride Rock from underneath with a bright LED as there was no moonlight to bring out the foreground.  The lights on the horizon are from Port Alfred 60 kms away.

If they’re accepted for the exhibition they’ll be priced at around R2500 for a framed print but I can supply a high resolution digital image for half of that. Contact me if you are interested.

I’ve been out from home to take night pictures around Grahamstown three times recently when the cloud (preferably no clouds) and wind (preferably no wind or light winds) forecasts were favourable.  The moon isn’t such a problem as you can use the moonlight to paint the foreground of your picture.  Night photos have been a dominant theme for me lately. I’ve had great results with the fantastic ‘live composition’ option on my new Olympus and I bought an expensive wide angle lens to catch as much light as possible.

The first picture’s taken looking down the Belmont Valley from the hillside below PJ Olivier School.  I had to hide the lights of Grahamstown behind the burned out tree stump and rocks but that gives a nice dramatic composition.  There was no moon but plenty of artificial light so I used a short two second exposure and took a live composition for 50 minutes. So the picture is actually 1500 images combined.

The second picture’s from just below the high point of the Oldenburgia Trail – where is goes over Dassie Krantz – south of Grahamstown.  This time the moon was full and I positioned myself so the moon, and lights of Grahamstown, were behind me – on the other side of Mountain Drive.  The camera settings are almost the same as the first picture. You can see the ribbon of car lights snaking along the N2 and the dotted lines of the two light aircraft flying along the coast.  There’s also a meteor – the thin diagonal flash in the centre-left of the picture (in the middle of the Milky Way).  The sky’s blue because there’s much less artificial light. 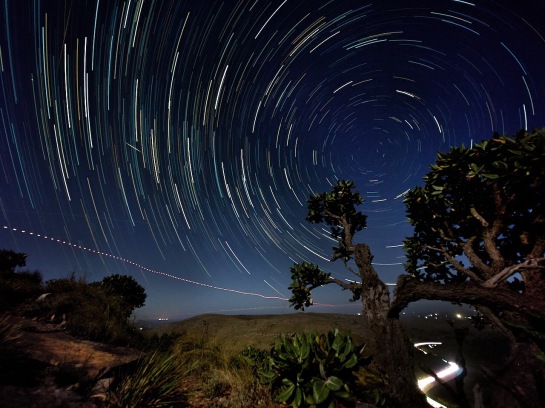 The last picture was taken a week later and only a few metres further down the Oldenburgia Trail.  This time I’ve pointed the camera south-east, looking down Featherstone Kloof, as the moon was just rising behind the crags to the left.  There are a lot more stars and a brighter sky because this composite is one-hour of five second exposures and the camera’s sensor picks up light from the fainter stars.  You can make out the glow of street lights from Bathurst and Port Alfred on the Indian Ocean coast 60 kilometres away.

We went back to Featherstone Kloof yesterday to see the King Proteas and all the other winter flowers.  We have had a warm sunny spell lately and so lots of flowers are blossoming in the grasslands and fynbos.  It was a real mix.  There’s this year’s Proteas with the most amazing coral pink shades, the winter leaves fallen in the forest, and last year’s Protea and Oldenburgia flowers all dried up and shrivelled into intricate patterns.  The strong warm wind made for pleasant walking but it made the photography tricky. 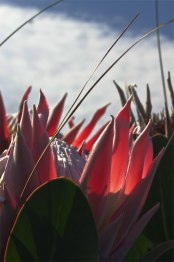 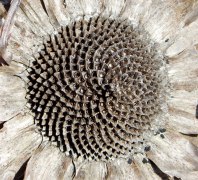 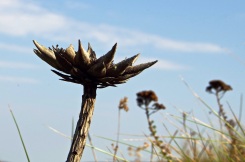 This is our favourite weekend walk.  Direct from the front door is a 14 km hike that starts by crossing the Grahamstown bypass and then goes up over the grasslands of Mountain Drive before dropping down ‘heartbreak hill’ and into Featherstone Kloof . Then it’s along the valley, across the stream, through some woodland and bush before the steep haul up the other side and back into the grassland and fresh flowers.

Last Sunday we walked through a very large patch of burned veld from the bush fires a week or two earlier.  There were plenty of new flowers coming through and we saw sugar birds on the King Proteas – which is a bit unusual.  It’s always a bit of a slog back up and over Mountain Drive but the thought of a cold Windhoek in the fridge at home can, just possibly, urge you on.

My verdict: a good round on a sunny winter’s day. 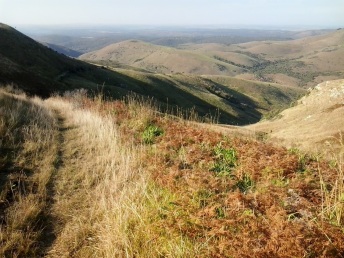 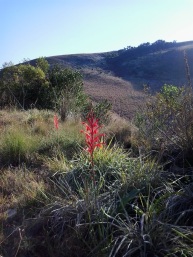 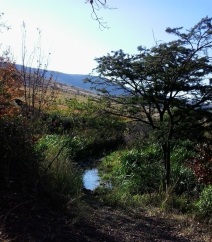 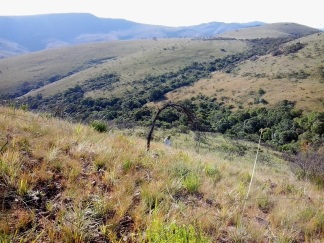 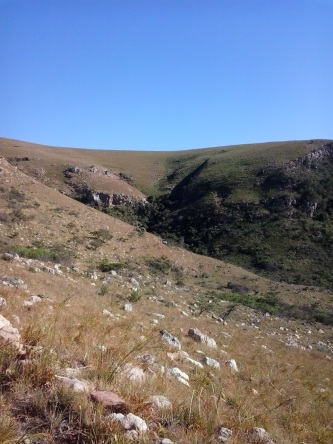 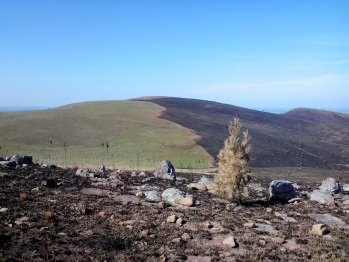 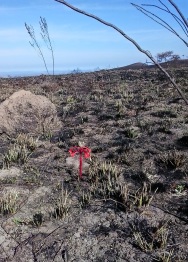 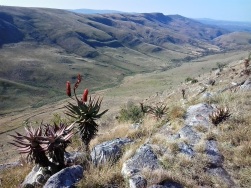 Today was the day scheduled for my hike over into Featherstone Kloof. The weather forecast on Saturday said that Sunday would be 30-35 Centigrade so I got up early at 5.40 and was off by 7.00.  Unfortunately the forecast was wrong and as I trod slowly home at 12.00 it was 39!  Far too hot. Fortunately I had spent quite a lot of time in the riverine forest at the bottom of the Kloof.  Even so it was a 10km round trip with 200 metres up to the ridge and then 250 down into the Kloof repeated on the way home.  You can see this on the little map

I was really looking forward to seeing some of the veldt flowers after all of the rain we have been having.  So after a sorghum porridge breakfast I packed a snack lunch of cashew nuts, rice cakes, bananas and toffees with a vacuum flask of ice cold water and a bottle of fresh mixed juice. The hike over was straight forward though my camera began to misbehave and would only take black and whites at one point.  I reset it once I got down to the cool shady picnic spot by the small waterfalls in the forest.  Only too soon I could feel the hot air coming through the forest canopy so it was time to get off back up heartbreak hill and down into town.  Cold beer and a cool pool were beckoning and I had a good set of pictures to share.