Little did I know when I was finishing work on my exhibition for this year’s #NAF19 that I was previewing the name change debate of the 1820 Settlers’ National Monument. I’ve got a panorama, taken from the cuttings above the N2 bypass, that’s entitled 1820 Settlers’ Sunset. I’ve since been told that it looks apocalyptic.

That was before the name change became so topical on social media (Grocott’s Mail is a good place to read about this controversy).

The second picture is an unusual shot taken from inside the Monument building. You have to imagine that you are lying on your back with your head at the base of the giant yellowwood sculpture in the Fountain Court and your feet at the fountain. So you are looking up an inverted cross past the Skotnes murals at the ceiling high above.

In this picture I’m definitely asking you to see the Monument from a different – and challenging – perspective.

They both look much better framed and on the wall as they are large images. You can see them in my solo exhibition ‘Reflections’ at the Johan Carinus Art Centre, Beaufort Street, 27 June – 7 July.

Two of the pictures I’ve taken in the past couple of weeks are merged here. It’s something that I experiment with every now and then and this time I’ve got an interesting result.

The first picture in the merge is called Across the Valley. It’s a shot I’ve wanted for quite a while. Taken looking down Wood Street in Fingo Village your eye is drawn immediately across the valley to the leafy suburbs of Fort England and Sunnyside. The 1820 Settlers National Monument and PJ Olivier High School are perched on top of the hills beyond.

The second picture was one I took on the fly. I was standing on the corner of Bathurst and High Streets in the town centre taking pictures of the heritage sites when a taxi came cruising past. The conductor called out Take my Picture and so I did. Here he is in typical pose.

With the photo merge I combined the two pictures together. So the image still looks across the valley but the taxi (which will take you there) is overlain on top. I use the Luminar photo editing software to achieve this affect.

I also gave the merged image a gritty analogue feel to hark back to the multiple exposures of the pre-digital age.

The second post of the Grahamstown heritage sites is a street-scene. There’s no getting away from the new in this picture because there’s a young cyclist front and centre. Behind him Howse Street runs up to the historical core of the city. There’s power lines and street lights leading the eye towards the skyline and the heritage sites silhouetted there. 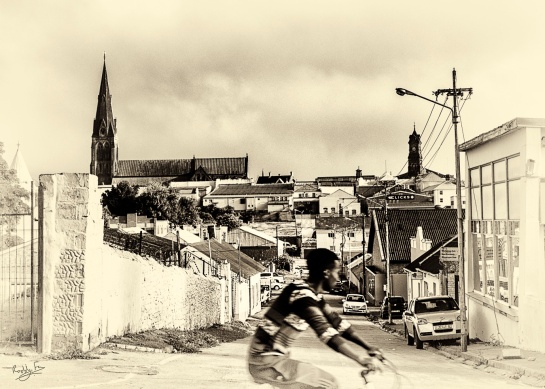 The Cathedral of St Michael and St George dominates this picture and strangely it isn’t a heritage site: though it is one of the city’s iconic buildings. The buildings that run between the two spires are the backs of the Victorian shops that front on to Church Square. These are all heritage sites: as is the City Hall itself. Later in the series I’ll post some pictures of them as they are architecturally striking.

As usual there’s a bit of a back story to the picture. To get a shot with a passing cyclist I needed to stand in the middle of Beaufort Street – and that’s a busy thoroughfare – mid-way between two sets of traffic lights. So I needed to wait until both sets of lights were on red and there was a gap in the traffic. It meant I dashed out into the road on a number of occasions before I was successful.

Several of this new series will be on display at #NAF19 in my exhibition called ‘Reflections’ at the Carinus Art Centre 27 June – 7 July.

The first post of a new series – Grahamstown Heritage – features the old and the new.

Fort Selwyn lies on Gunfire Hill and it was built for its strategic view over the city below. No great surprise that it’s one of Grahamstown 70 heritage sites. These days it has lost its military importance but it does make a spectacular vantage point. That’s especially true for students who come up from Rhodes University after Friday classes to watch the sunset and then the moonrise. All whilst having an early evening drink or two.

There’s an interesting backstory to this shot. Night photos usually need a daylight reconnaissance. I’d already been to Fort Selwyn at night taking pictures of car headlights trailing across town. That’s when I first saw the students perched on the Fort’s ramparts. But then I had to go back in the daylight and work out how to get high enough to get the students and the town below plus the full moon and all of Fort Selwyn in one shot. I solved it by climbing one of the megaliths that surround the 1820 Settlers National Monument. When I returned that night I brought a stepladder, propped it against the rock, climbed up and installed my tripod. Then I just had to wait for the moon to climb high enough whilst the students enjoyed themselves. There was, of course, plenty of musical accompaniment from the sound systems in the open car doors. Not a soul noticed me, or the ladder, perched on the rock. You can see my shadow in the right foreground as a passing car’s headlights helpfully revealed the foreground of the picture.

I expect to have several of this new series on display at #NAF19. My exhibitions called ‘Reflections’ and I’ll be at the Carinus Art Centre. In the next day or two I’ll have the picture for sale as a print or for downloading over at my store.

Here’s the large picture that’s drawn the crowds and the comments at my #NAF19 exhibition ‘Symmetry’. I did a photo shoot last year of the Fountain Court at the 1820 Settlers National Monument because it’s my favourite part of the building. The title picture’s taken as if you were lying on your back looking up to the skylight several stories above you. There’s natural light spilling in from both sides and down from the top but artificial light on the other two sides. I used my tiny 9mm fisheye body cap lens to pull in as much of the space as possible. The rectangular shapes of the famous yellowwood scaffolding sculpture, the many long pillars and banner-like Skotnes murals all help make this dramatic shot. The fisheye lens does a great job of curving them round the Millstone Fountain and sunburst roof decoration. Here’s the photo essay of the rest of the shots I took.

You can see the print at my exhibition ‘Symmetry’ which is at the Carinus Art Centre, Beaufort Street for the duration of the 2019 National Arts Festival. It’s printed on Premium Luster archival paper at 67 cms wide x 76 cms high. 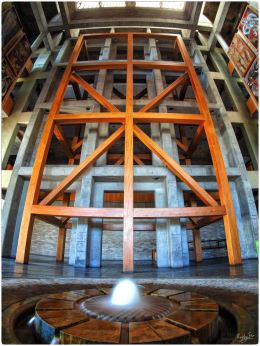 It’s an unusual place – Grahamstown – located in a basin at the headwaters of the Kowie river. The poor black population in the eastern townships look across to the middle class suburbs on the other side of the valley.  There are not many South African cities where black and white are so closely juxtaposed. I live in Sunnyside, on the south side of town, and our house is quite high up on the side of a hill. A lot of my pictures look down into the valley.  I’m frequently photographing into the light too.  The cathedral is nearby – further down Hill Street – with the northern suburbs lying beyond.  Makana’s Kop is another Grahamstown landmark. It dominates the eastern side of town – across the Belmont Valley.

I wanted a set of black and white pictures so I needed to capture textures and shapes. South African townships are typically laid out on rectangular lines. This makes for clear compositions.  The two pictures here were both taken in winter with low angled light. Before dawn Vukani was wreathed in mist and smoke. I managed to catch the first rays of sunlight cutting across the mists.  Monument to Makana was taken just after a storm had passed at sunset.  Highlights of rain outline the regular street patterns.  The 1820 Settlers Monument is the large rectangular building that lies in the foreground of the picture.

In summer we are likely to get thunderstorms – but many of them drift eastwards past the town.  From the stoep of our house you can see them over the horizon – behind the spire of the Dutch Reformed Church.  Of course some of them do hit the town bringing heavy rain and dramatic lightning.

Off to the north west is the Rhodes University campus.  It’s surrounded by tree lined streets. Some exotic monkey puzzle trees are in the foreground of this picture.  Belmont Valley lies to the south east.  It’s where the Kowie River runs down to the sea. The leafy suburbs shown here are above and below Hill Street. They are beside the old road down to Port Alfred.

The last two pictures are also taken from the south side of town.  They’re higher up – on Mountain Drive – where we take our dog walking.  Both of them are looking right over the bowl containing the old districts of Grahamstown.  The townships have now spread right up Lavender Valley and out on to the plateau at Hooggenoeg.  The mountains on the skyline are the Amatolas.  The last picture is looking north-west – into the semi-arid Karoo. It shows the Winterberg range that is approximately 80 kms away.

There’s a nice selection of my Grahamstown pictures over at my online portal roddythefox.co.za. They’re reasonably priced. All of the pictures were taken with my Olympus OMD EM5 MarkII.  I’ve edited them in Lightroom using the Nik collection of plugins.