Here is a story I wrote for our children and grand-children. A modern day fairy tale inspired by the magical northern lights I saw in Turku last week and the mythical story of Revontulet. The northern lights are the fox fires of the far north: snows and frost thrown high up by the fox’s fiery tail.

This is the story of Revontulet and how he brought the northern lights to Turku.

Revontulet was getting old and he decided to take a great trip.  Why? Well my children he was the best northern lights maker and one day he would be gone. So he made a plan.

He would visit the city of Turku far in the south to borrow the human’s magic spyglass that captures pictures. Then he can show the northern lights to his grand-children and great grand-children. You will see the wondrous show he made if you listen carefully to the end and maybe, just maybe, you will grow up to be as skilful and powerful as Revontulet himself.

It took him many, many days and nights to get to the city of Turku.  He crossed streams and picked his way through marshes and hills before coming to fields and places where he had to dash across roads. He was happiest sliding through whispering forests and drinking from the dark water of the lakes.

His food was orchard apples fallen from the trees with cabbage and roots from the farmers’ gardens. Sometimes a spider and a crunchy worm would come his way or he would take a careless chicken from the farmyard. Then one night from a hilltop he could see the far away glow of the human lights.  Revontulet grinned to himself thinking, well, I need to borrow a spy glass and I need to have some good food but I will give them a show to remember.  Their simple lights are nothing!

So down he went to the city of Turku and along the banks of the river Aura.  No-one saw him he was so quiet.  His magic power made him almost invisible to humans so when he saw them he just went still and stayed silent.

The spyglass shop on Hameengatu was closing but he slid in behind the assistant when she wasn’t looking and, quick as a flash, he took a spyglass.  He made sure he knew just where it came from because he had to take it back later.  He could see an easy entrance through the cat flap in the back door.

He badly needed some food so he strolled across the bridge – no-one was looking for a fox sauntering there so they didn’t see him – and entered into a pub through the back door in the alley.

Revontulet knew it used to be a school. His only human friend – Sara who rescued him from the grip of the frost giants – had told him that she had learned to read there. But now the humans didn’t need to learn old-fashioned things so this one served hot food and filling ales.

Every time a waitress left the kitchen he quickly scooped an item off the dish: steak and fish were his favourites.  He discovered he didn’t like fried onion rings or potato wedges.  The beer glasses were cleared away but they weren’t always quite empty so he managed a few quick drinks of fine strong dark ales.

Soon it was time for the northern lights.  Revontulet was clever though. First, he thought, I’ll throw up some small sparks of frost to light up the sky while I try out the spyglass.  He placed the magic spyglass on the bridge and gently dashed some fine frosts like smoke across the eastern sky behind the old cathedral.  He looked in the glass when he got back and was pleased – aha, he thought, now I can see some green sky, that’s how this glass works.  I will put it on the steep steps on the way up to the observatory above the city for another view. 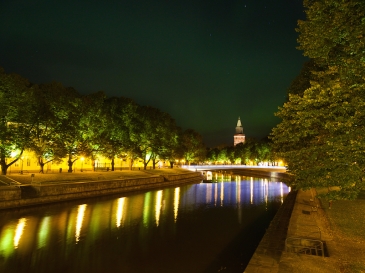 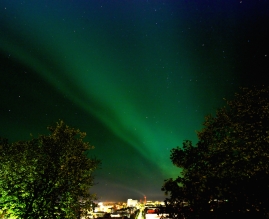 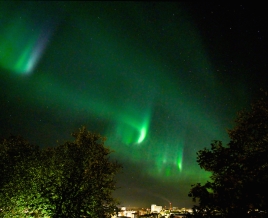 So he scampered across the bridge and up the winding stairs to the top of the hill.  There were a few humans there with strange looking three-legged creatures that stood quite still. It was dark and they did not see him so he put down his spyglass and did another smooth turn over the city rooftops.  Again his glass had worked. He was so happy he shot away across the heavens and swooshed back.

The humans were exclaiming and pointing at the sudden colours in the sky and didn’t see Revontulet borrow one of the three-legged creatures.  Clever old Revontulet saw that the humans put their spyglasses on the top of the creatures to hold them perfectly still.

He went right to the top of the hill behind everyone else. Then he placed his glass on top of the creature and put a spell on it so it would stand quite still and catch all of his wonderful colours and shapes.

“Now it’s time for the real lights to begin!”

Off he flew: first to the east and then north: higher and higher.  He danced with the stars and he danced for the moon and as he turned he spun and curled his tail, throwing the snow and the frost high into the heavens.  The night sky shimmered and turned blue and green, with violet lights on the curtains and waves, they were like snakes and sea serpents, dragons and lizards. Last of all he burst out in the graceful shape of a swan: like a crown high above the hill. 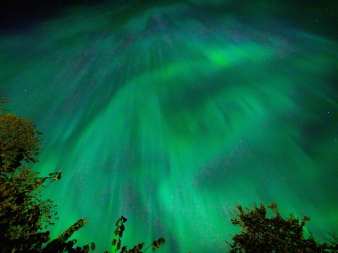 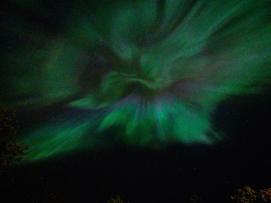 Revontulet was very, very happy.  He had brought the northern lights to Turku.  After he returned the three legged creature, he trotted down to the spyglass shop and, using his special magic skills, he made lots and lots of wonderful pictures for us to see.

And if, my children, you happen to visit the beautiful city of Turku one night you can follow old Revontulet’s footsteps. Make sure you gaze out to the north above the old cathedral spire. Who knows, you might see his children far away in the sky dancing like the smoke from a fox’s fire.

And that is the end of the story of Revontulet comes to Turku.

I have just time enough to visit the three elderly ladies when travelling to work on public transport. There’s a short bus connection at Uddevalla Kampenhoff from getting off the No 5 from Äsperöd and changing to the mainline 860 for Trollhättan. I can walk across to the river where it runs past the Bohuslän museum and greet the ladies.

Sometimes it’s been cloudy and raining, other times there’s been sun, but I always value the tranquility of my short walk.  You go past the fruit and flower seller (usually making a purchase if going home) and then along past the avenue of horse chestnuts masking the facade of the bus station before you get to the river. 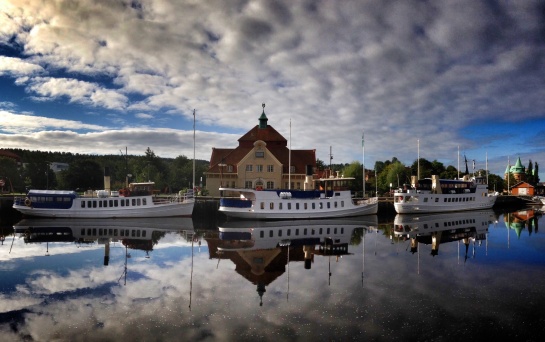 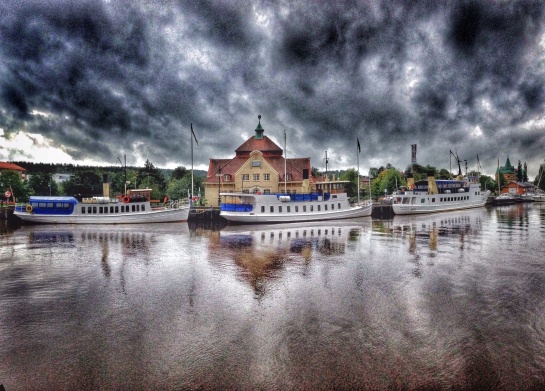 I rarely take a camera to work and so it’s out with my phone and a quick panoramic shot from the riverbank – being careful not to slip into the river from the wet wooden quay.  I’ve got the free app Snapseed on my phone and so I usually edit the picture on the bus.  I run the picture through the drama filter and add tonal contrast to get the punchy, vivid and sometimes unreal effects in the pictures.

I think adding a little drama is the least I can do for them.  They are currently resting from a summer taking visitors and townspeople to the resorts like Gustafberg down the fjord.

I took a short walk into town today, for lunch with my colleague Johanna at Turku’s Saluhallen.  A late morning in early October brought out plenty of interesting sights as I went down the street below Villa Hortus, then across the cathedral square and along the river bank. First I went past an abandoned dinner party and around the corner was a gold wrapped cane propped against the wall.

Standing in the middle of the cathedral square you have to wait for the shoals of cyclists and pedestrians to come through if you want a clear shot.

Then once you have crossed the Aurajoki and look back over the bridge you see that the cathedral poses so nicely amongst the trees.  The wall you are leaning against and the leaves underfoot are nice and warm so you are tempted to stay and take a whole lot of pictures that you will never use.

But it’s time to get your gloves back on, fumble the lens cap into place with cold fingers and then head off for lunch. The Saluhallen now boasts at least half a dozen small eateries with plenty of choice from traditional soups, herring and mash through to sushi. I settled for three different tacos and salad: delicious!

Visit the Online Store for the Lockdown Sunbird Series