Friday last week was taken up entirely with the public defence of Per-Olof Hanssons’ PhD thesis: New Ways of Learning: Participatory Action Research and Kenyan Runners’ Appropriation of Smartphones to Improve their Daily Lives and Participation in m-Learning.

I was invited to be the opponent and soon learned that meant I had to make a presentation (below) summarising the thesis and then lead the discussion.  All of which is open to the public.  The three examiners, interested colleagues, friends, relatives and the general public all took part in the debate that followed.  This was a lovely experience to be a part of: one that is radically different to the behind-closed-doors process in South Africa.

After the discussions the examiners and supervisors withdrew to deliberate and returned later to announce the successful award of the PhD.  The partying then started and continued late into the night.  Per-Olof had kindly organised a really nice meal for family, friends, colleagues and guests at the faculty club on Linköping campus.  The proceedings  were punctuated by speeches and present giving (as you can see from the pictures!)  The live band kept the dancing going and we returned to Valla Linköping many hours later.

Crate of Tusker for Per-Olof 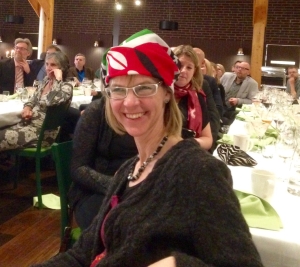 I was fortunate enough to be sitting with two of the elite Kenyan runners who had benefitted greatly from Per-Olof’s programme.  They were in Europe to compete for the Spring season and were hoping to win in this year’s Copenhagen marathon and half-marathon.  Last year they had won 13 of the fourteen events they had entered.

Here’s the presentation I made.

Red skies over the Three Hogs. This is just about the last of the Christmas live composites taken up at Helen’s place in Hogsback. It’s taken me a while to work through them - that’s something I’ve been enjoying though. They bring back lots of happy memories. #visithogsback #hogsbacksa #photoart #hogsback #clouds #redsky #longexposureoftheday #longexposure #naturephotography #naturehippys #olympusomd #landscapephotography #naturephotography #africa #southafrica #easterncape #instagram_sa #instameetsouthafrica #livecomposite